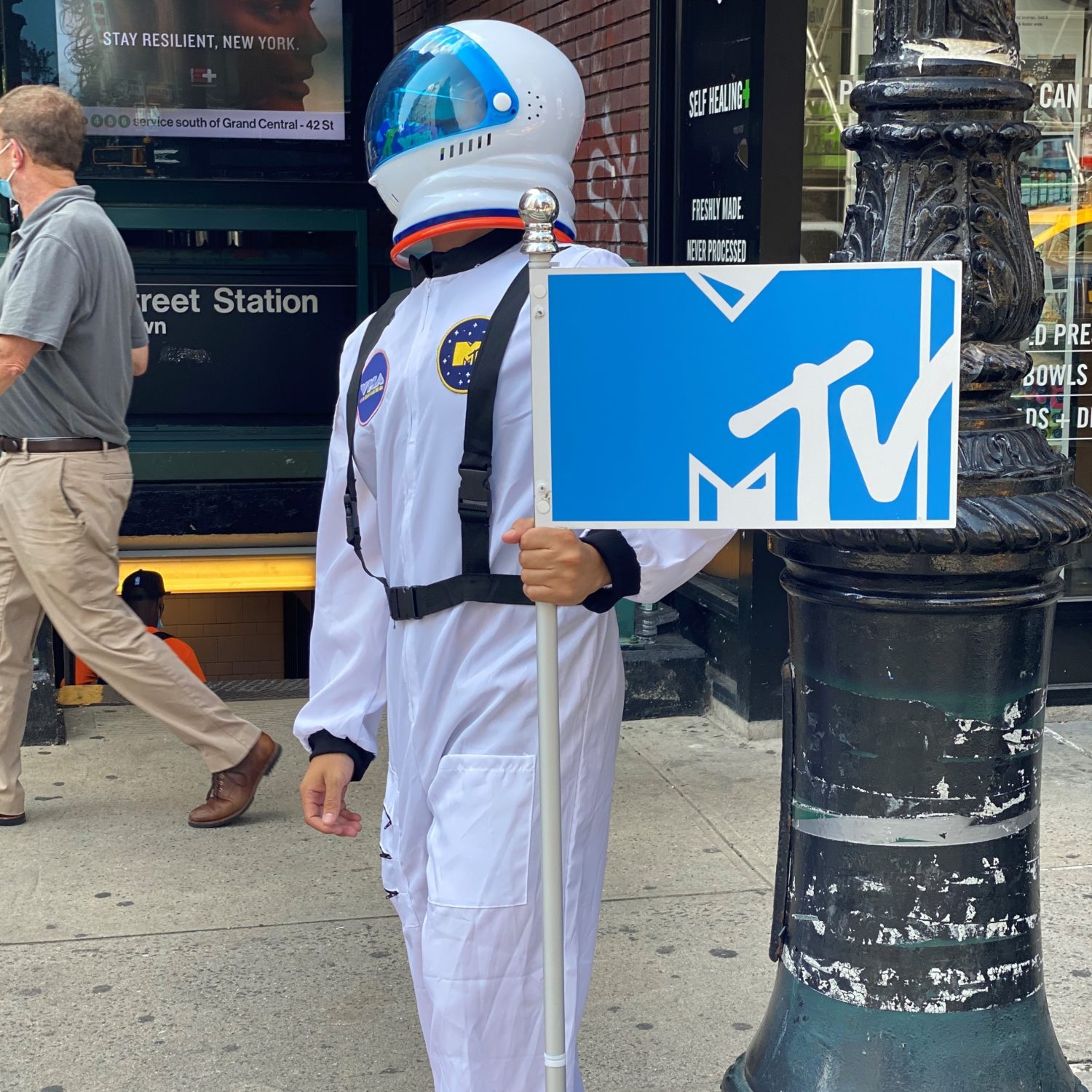 By Jacquelyn Sparks  •  2 years ago

Experiential Comes Alive at a Social Distance: NYC is not Dead!

Pop-Up events are making a return to NYC after nearly six months of silence. The reports of sightings of a masked-up astronaut popping up on street corners around Gotham are true. MTV’s infamous “Man on the Moon” and accompanying promotional food carts and trucks are making their rounds around the Big Apple all weekend to promote Sunday’s VMAs which will air on the MTV Network at 8:00pm EST.

What do you do and how do you hold the ultimate fan experience at a social distance while maintaining all health-mandated protocols?

You give away MTV/VMA Masks with a promotional postcard hyping the VMAs. You place your trademarked, highly recognizable mascot “The Man on the Moon” at street corners next to where your holding your activations to attract visitors. And, you place logo-d up food carts and trucks in select locations throughout the city to further cement the big news.

The 2020 MTV Video Music Awards are taking place in New York City’s Brooklyn area this Sunday, August 30th but as a never been done before type of awards show. Earlier this month, MTV made the decision to forego an indoor VMAs at The Barclay Center, which was initially planned, due to health and safety concerns.

The 2020 MTV Video Music Awards are taking place in New York City’s Brooklyn area this Sunday, August 30th but as a never been done before type of awards show. Earlier this month, MTV made the decision to forego an indoor VMAs at The Barclay Center, which was initially planned, due to health and safety concerns.

In early August the network announced that the VMAs would instead “pay homage to the incredible resiliency of New York with several outdoor performances around the City with limited or no audience. They also assured the city that they “will continue to work closely with the Department of Health, state and local officials, the medical community, and key stakeholders to ensure the safety of all.”

And just like that, experiential events are adapting to the “new norm” as part of the marketing and promotion plans for brands during pandemic times. After receiving permission from NYC, the music network and its promotional agency stepped into action.

The VMA Pop Up Events run Friday, August 28 through Sunday, August 30th from 11am to 7pm. Food carts, food trucks and the iconic Man in the Moon can be spotted in select sections of Brooklyn, New York City and in New Jersey at Asbury Park and Pleasant Point Pleasant.

In advance of last year’s Video Music Awards (VMAs), Pepsi and MTV presented a weekend-long experiential “Pop-Up Museum of Missy Elliott.”, to delight fans with the ultimate interactive experience.  The weekend events were in celebration of the VMAs and its Honoree — Missy Elliott — who received the Michael Jackson Video Vanguard Award.

It is refreshing to see brands adapt to the “new norm” and re-embrace experiential activations and pop ups as part of their promotional and marketing strategies. These unprecedent times present marketers with the challenge of coming up with fun and interactive experiences to connect brands with their consumers in a socially distant and safe way. The VMAs pop ups are setting the standard for what experiential activations will look like for the foreseeable future, which are simple, surprise pop-up activations that leave a powerful and positive impression on consumers. — Jacquelyn Sparks

Jacquelyn Sparks is a marketing professional who has worked at national sports organizations and world-class marketing agencies. She has developed experiential activations, integrated marketing campaigns, and partnerships for elite brands like TikTok, Ben & Jerry’s, and Investors Bank. A next generation leader, Jacquelyn earned her Bachelors of Science degree at Syracuse University in Sport Management with minors in Marketing and Spanish in 2016.
Submit a Comment